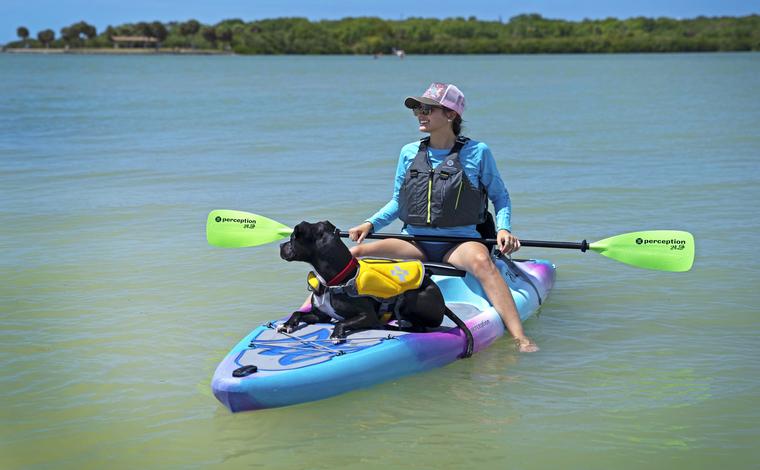 Kayaking doesn’t have to be a foreign language. Learn some simple kayaker lingo and you’ll be well on your way toward paddling the wild blue yonder and sharing your passion with other paddlers.

Deck - The topmost part of a kayak

Hull - The bottom part of a kayak

Bow - The front of a kayak

Stern - The back of a kayak

Deck Rigging - Bungee or rope on the deck of a kayak, used to secure gear.

Perimeter/Safety Deck Line - A line running along the outer edge of the deck, used for holding on to the kayak in a capsize or rescue situation.

Hatch - An opening on the deck of a kayak, used for storage.

Coaming - The raised lip around the cockpit of a sit-inside kayak.

Keel - Longitudinal structure along the centerline at the bottom of the hull, sometimes extended downward to increase stability and tracking.

Waterline - Where the hull meets the water surface.

Skid Plate - An abrasion-resistant material often affixed to the underside of a boat to prevent damage from scraping.

Drain Plug - A plug in the stern that secures the drain hole on a kayak.

Scupper Holes – Self-bailing holes usually located in the seat, tank well and foot peg area of a sit-on-top kayak that allow water to drain (as the kayak moves across the water, these holes create a vacuum, preventing water from getting in).

Foot Brace – Small, adjustable (or moulded-in) foot pegs for your feet to press against.

Drop Skeg - A tapering or projecting stern section of a kayak’s keel used to increase tracking; usually retractable by a rope or cable located on the kayak’s side.

Rudder – A blade at the stern of the kayak, controlled by foot pedals in the cockpit (or a hand-lever in fish kayaks), that pivots from side to side to aid turning.

Rocker - The rounded (banana-like) shape of the hull. A kayak with more rocker will have a more rounded bottom from bow to stern (like a rocking chair), and be more manoeuvrable; less rocker will offer better tracking and speed.

Paddle Float - A safety device used for self-rescue, consisting of an inflatable sleeve which can be strapped to a paddle blade, offering more surface area. When deployed, it can help a swimmer get back into his/her kayak.

Bilge Pump – A cylinder-shaped hand pump designed to remove excess water from inside a kayak.

Spray Skirt - A flexible material (usually nylon or neoprene) with a hole for your torso that attaches to the coaming of a sit-inside kayak to keep water out (popular among sea kayakers and those paddling in cooler climates).

See the Hi Life Kayak/SUP shown in this article - it's an award-winning hybrid that's twice the fun!